WAHOO - Signed Contract for Beyond Tomorrow

Signed the contract with Willow Moon Publishing for Beyond Tomorrow, sequel to Riley's Journey and Into the Savage Dawn.  Here's a little snippet to get your interest going:

What am I going to do? She wanted to scream and rage against her presupposed fate. The savage Cros were animals, brutal and sadistic even amongst themselves and outsiders were little more than fodder for the beasts.
She whimpered. She had only herself to blame. She’d been warned about venturing from the compound alone and now she was paying the price for her carelessness. She could only guess what might have happened to Geena—or to any of them for that matter. For all she knew, they all could be dead or captives like her. The babies… She couldn’t bear thinking about what would happen to the little ones.
She felt herself sliding from the bony shoulder of the savage. He dropped her without regard to the jagged rocks or sharp sticks poking from the ground. She landed with a hard thump, shards of pain radiating through her body. Braying with laughter, he meted out several nasty kicks to her backside then spit a yellow glob of phlegm. She curled up, sobbing and praying for a quick death. Don’t let them eat me!
A few moments later, he grabbed a fistful of hair and yanked, forcing her head back. Rotting green teeth were bared in a sinister grin while his venomous black eyes raked her body. A rough hand fondled her right breast and then squeezed so cruelly, she yelped around the gag. He yanked her hair again, spewing spit as he cackled. Moisture washed her eyes and trickled down her cheeks. The bastard enjoyed inflicting pain.
Terror eased, giving way to fury. She dropped her glance, fearful he would see. I hope you die! Badly! 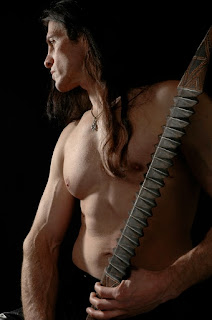 I love this series! I cannot wait to get it on my nook. I think you are a wonderful writer.

Thank you Martha - sorry it took so long to respond.