Mr. Man and the Romance Van 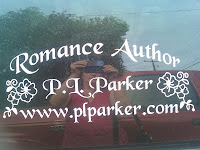 As an aspiring author, my goal is to let the world know about me. Ergo, the sign on the window of my Chevy van.

I love my sign. Mr. Man (my husband) even helped center and attach the sign to the window, carefully measuring every angle and smoothing the bubbles out. He didn’t think much about the sign after that—and then people began to take notice.… 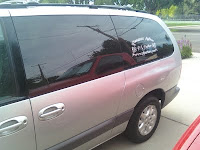 Because I write under the pen name P.L. Parker (my maiden name), I leave gender out of the picture. (I read somewhere that just using initials can aid in bringing the male population in as fans.) My husband has been confused with me on numerous occasions and he doesn't always view it as amusing.

For example - he (nice guy that he is) took my van to the car wash. A very sweet young man approached him and asked if he was the romance author. My disgruntled husband growled "No. My wife is!"
The young man grinned. "Oh really," he said.

Mr. Man tried another car wash, same thing happened. Another time we were driving down the freeway and a truckload, literally a truckload, of cowboys drove up beside us. They were hanging out the windows on every side yelling, "Oh Yoohoo, Mr. Romance Man - yoohooo!!" His eyes straight ahead, my husband made for the nearest off ramp, growling all the while. I of course was laughing my head off.

Then there was the time his truck broke down (he manages properties) and he had to borrow my van for the day. He indicated later it was hard to be professional when all his contacts were eyeing the van, then him, then the van - and grinning!

I drive every day and seldom have any comments, but it seems as though every time he is out driving alone, the catcalls and comments fly. It is if he is cursed. Little by little, his love for the sign

Next year, we plan to trade in the Romance Van. Mr. Man has indicated that when the time comes and we have a new vehicle, my sign will go by the wayside. NO SIGNS ALLOWED! What is he thinking? Give up my sign? How will anyone know who I am?

But do not despair my friends! There are always opportunities…..

I have to say, Mr. Man is my best fan! He reads everything I write, has wonderful input and criticisims and he is actually the reason I started putting my stories down on paper (or computer :)). Being a husband to a romance writer can be stressful at times, but he's a staunch supporter.

How does your significant other deal with the stressors of the romance world?

What a great story, Patsy!

I keep my writing secret from most people we know. I live in a conservative foreign country and definitely don't want to be kicked out!

Thanks for stopping by Lisabet! How interesting about your place of residence!

OMG! That's hilarious! My dh actually helped me with a scene where the hero was shot and the heroine was supposed to roll him over. DH got on the floor so I could see which way would work for a smaller woman to leverage a man over. Of course he tells his buddies he helps with "other" scenes. LOL

Your post was hysterical, PL; loved it!
My Mr. Man is a huge supporter of 'my dream' (as he calls it) but can get a little cranky when he thinks I'm at the computer too long (and not paying him enough attention, lol). Those Mr. Men (especially my lion of the zodiac) can need a little extra ego stroking every now and then. Best to give it and get back to the keys! ;)

Hi Patsy, imagine I also had two signs on my bumper, I LOVE ROMANCE with a red heart fo love, and ROMANCE MAKES YOU HAPPY. My gray Toyota was well known in the area. I don't know if it helped selling books. My DH is very supportive, often brainstorms with me and gives me a male point of view I could have missed. But he protests I stay too long at the keyboard and should pay him more attention.

Did I tell you I am reading Aimee's Locket and love it?

Thanks for stopping by Jennifer, got a good laugh from the visual!

Joanna, my husband gets cranky too, starts telling me the exact time - by the minute!

Mona, I'm sure the signs made people wonder, and that's what moves them to the next step - actually searching you out and reading about you. So thrilled you are reading Aimee's Locket - thanks for letting me know.

If I put a sign like that on my SUV, my husband would never drive it again! Hmmm, not such a bad idea... You've got yourself a keeper.

I still think I will put something on the new vehicle. Yes, my hubby is a keeper Jannine!

How funny. I loved this post.
You could probably just remove the word romance and no one would bother him.