Ancient history has always been a favorite of mine! The veil surrounding the far past is a dark one, opening so seldom and it seems like every time the scientists have it pegged, something new crops up and the timeline changes. Several of my stories are the result of watching the Discovery Channel. A wealth of fascinating information rests within those viewings. The discovery of Otzi the Iceman in the Alps bordering Austria and Italy sparked the beginnings of my journey 40,000 years ago. For details, check out:

p://wilderdom.com/evolution/OtziIcemanAlpsPictures.htm
My curiousity grew. Could modern man thrown back into the last great Ice Age survive? Would he have the knowledge and skill necessary to provide food, clothing and a place to live in such a primitive environment? Animals such as the saber toothed cats, Mastodons, megaloceros (giant elk) and the terrible cave bear have evolved or disappeared into the mist of time.

I doubt one person could have survived. But what about a group of people--those trained in the art of survival and warfare?

Riley's Journey came into being:

The research project was only supposed to be for an "extended period." No one said anything about forever! So Riley's journey begins. Sent back 40,000 years to be the mate of a man she had never before met, Riley struggles to understand and adjust. Her journey will take her into a world fraught with dangers - a world made more treacherous by savage beasts, primitive Neanderthals, and the incursion of the aggressive Cro-Magnon man. Surviving alone for five years in this vast wilderness, Nathan, along with his enormous dog, Demon, carve out a life in the perilous environment. Though thrown together by forces beyond their control, love grows between Riley and Nathan - but will they survive?

My fans responded -- they wanted more! I was surprised but happy to drag out my research and begin again. The sequel:


Into the Savage Dawn:


Sent back 40,000 years to the ends of the last great Ice Age, the time travelers emb 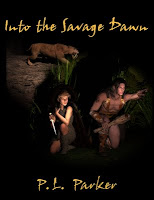 ark on a journey of survival and discovery. The brutal and cannibalistic Cro-Magnons discover the small band and attack. Forced to flee from their high mountain encampment, the tribe heads into the dawn, towards the Pacific Ocean and their dream of ultimately reaching North America. Geena and Micah are left behind to lead the Cros away from the escaping tribe. When he is killed, she finds herself terribly alone. Severely injured and without hope or resources, she nonetheless is determined to survive and find the people. Survival of the fittest - that is the law of primordial earth.


And amazingly enough - they wanted more. I'm currently working on the third chapter in the story of the Black Ops team sent back in time 40,000 years. Come and experience the journey with me. I don't think you'll be sorry.


Leave a comment and be entered to win an e-copy of BOTH Riley's Journey and Into the Savage Dawn. Contest ends September 15.

P.L., was a great premise. I love the history and discovery channels. It's wonderful you went so far back and brought that time back to the reader.

These are two books I been wanting to read for a long time. I love ancient history too - ever since I read 'The Valley Of Horses' and 'The Clan Of the Cave Bear.' It's a fascinating time to read about - although I'm not too sure I'd have wanted to have lived then, especially as horses hadn't yet evolved into the magnificent animals they are now! :)

These books sound fascinating. I love history, including ancient. And your blog is stunning!

Ooo - I love the premise for these books P.L! I would never have thought of a romance during these times, but man - do I want to read it! : )

Thanks everyone for your comments! I left a comment this morning but it doesn't seem to have stuck! Another lady said google wouldn't let her comment. Let's see if this one works.

I have to admit that I prefer living now, although I do love a good time travel novel. Best of luck with both books and continued success in your career.

I'm way late as usual but your books sound delicious, right up my alley. Pretty soon, I'm taking a breather and digging in. Can't wait!

Thanks Sky - right now we are working on having one end of the house re-sided! I need a breather too!