New Cover Art for The Chalice 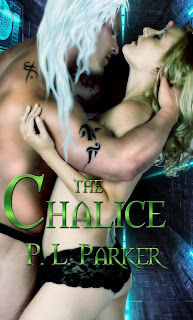 Decimated by the savage Deg’Nara and teetering on the brink of extinction, the last surviving males of the once great Chiagan-Se embark on a quest to salvage what is left of their civilization. They send their remaining seeker ships into the void, searching for genetically compatible females. Time is running out, but in the far reaches of the universe, on an obscure and primitive planet, a match is discovered.

One thousand panic-stricken women awaken two hundred years in the future, captives aboard an unmanned alien spacecraft bound for parts unknown! How had they gotten there and why?

The males thought they came willingly. The females believed they’d been kidnapped. Full of hopeful expectation, the Chiagan-Se prepare for the arrival of their new mates. Terrified and furious at the inexplicable abduction, the women prepare for combat! And when the two sides meet, the battle commences.
Posted by P.L. Parker at 6:09 AM

Thanks for this wonderful article. One other thing is that nearly all
digital cameras arrive equipped with any zoom lens that enables more
or less of that scene to generally be included by means of 'zooming' in and out.
These kind of changes in focus length tend to be reflected inside viewfinder and on big display screen right on the
back of this camera.