A big welcome to my guest - Chanta Jefferson Rand.  Recently, I had the pleasure of visiting with Chanta or her blogtalk radio show and Chanta is an interesting and gracious hostess.


Chanta, tell us about your latest release - You've Got Male!
Novel: YOU'VE GOT MALE! 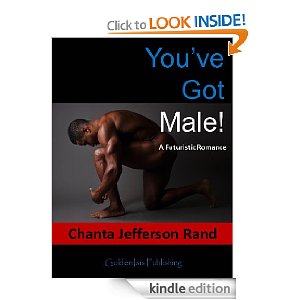 In the year 2084, romance has been simplified. A woman can have her ideal mate custom-made and delivered in less than a week. Known as the e-Male, this life-like mate is guaranteed to provide the ultimate satisfaction both in and out of the bedroom.

Calix Sims wonders what kind of pathetic woman would pay for the love of an e-Male. With his career as a reporter for an online journal in jeopardy, he has one last chance to deliver a story. When his boss gives him an ultimatum to write an exclusive worthy of a Pulitzer or end up jobless in the streets, Calix agrees to go undercover as an e-Male. He’s determined to produce an exposé that will make him world-famous.

Fed up with irresponsible men who don’t measure up, Rayne Matthews special-orders her dream man right down to his size 12 shoes and mystic green eyes. She wants a man who’s smart, sexy, sensitive, and doesn’t come with a boatload of emotional baggage.

But from the moment her fantasy man, Calix arrives, nothing goes according to plan. To Rayne’s annoyance, he acts just like any other man – cocky, opinionated, and downright bossy. But he’s also drop-dead gorgeous and sexy enough to make her heart stop. Then, one day Calix disappears. Heartbroken, she believes she’ll never see him again. Then, she reads about herself in an online blog, and she learns the truth about her e-Male.

To complicate matters, Calix finds himself falling hard for Rayne. He pulls out all the stops to win her heart. Rayne doesn’t know whether to forgive him or break his neck. She realizes she’ll never have the perfect man, but can she have the perfect love?

My journey with YOU'VE GOT MALE!
I have fascination with Sci-Fi.  I think the reason I love Sci-Fi so much is because of all the gadgets. I'll watch anything with futuristic technology, games, and ultra-modern conveniences.  I often sit around and predict the trends that I think will be available in the future.

One of my predictions for the future is that there will be no more big screen TVs and no more laptops. Instead, people will view data virtually in 3D holographic screens that only appear when needed. No more clumsy TV stands, computer desks, or flat screens. If you've ever seen the movie, Minority Report, you have an idea of what I'm talking about. You've Got Male! is filled with technology and gadgets like this.  The header of each chapter begins with a quote from a famous "space-inspired" movie or song. While you're reading, see if you can identify it.

My wild imagination (partly fueled by Moscato D' Asti) helped me create the world in You've Got Male! I started with concepts I'd like to see in the future (like cars that drive themselves, touch screen holographic technology, and robotics). Then, I researched online scientific journals and popular websites to see what future trends would be.  I also consulted Wikipedia to get specifics on certain chemicals used such as Nuromax (which is used in teh bok to slow the breathing of the hero while he was stuck for 12 hours in a box with very little oxygen).
YOUV'E GOT MALE! also shows readers many of the energy efficient techniques that I hope will be used in the  future.  Everything from fuel to transportation to healthcare to food is covered.  In Chapter 4, readers get to learn about Monsanto, the world's leading producer of chemically-engineered food.  I first learned about this controversial company in a documenary I watched years ago, entitled The Bad Seed by Jeffrey Smith.  You can learn more on Amazon here.
The header of each chapter in YOU'VE GOT MALE!  begins with a quote from a famous "space-inspired" movie or song.While you're reading, see if you can identify it. And of course, there's also the romance angle. Calix and Rayne manage to find hot sex and romance despite their differences. I truly hope you enjoy You've Got Male! It's a short story, but I put a lot of time and research into it.

Drop me a line through my website and let me know what you think the future holds. Oh, and no weirdo doomsday comments, please. I'm in the business of romance - I'm selling hope!
Chanta Jefferson Rand's website: wwww.ChantaRand.com and The Chanta Rand Show, my internet radio show that airs Tuesdays at 7 PM CST on Blogtalk. To listen, dial in to 760-587-4063 or go to: http://www.blogtalkradio.com/search/chanta-rand/
Posted by P.L. Parker at 2:51 PM

Good Morning, Chanta! So pleased to have you as my guest this week. Looking forward to visiting.

Great blog ladies! What a great world I hope to see when I get reincarnated!
Just a note. Your 3D TV has been in the works for many years. My DH told me about it a long time ago. They will be literally in your living room someday. You'll be right in the thick of things! But, it's gonna be very expensive!!!
Chanta, I love the premise for this story!

Very interesting storyline for You've Got Male. I love it. This sounds like a great love story. I'm not one for thinking about the future. Yet, I remember back in the Sixties hearing about how some day we'd take our telephones and the same numbers with us wherever we went, and it sounded Sci-Fi. I can't even imagine what the future holds.

Sounds like a fun story, Chanta! Wish they had special-order males when I was single, lol. But then he'd be my hubby anyway. :) Congrats on your release.

Hello Chata and Patsy - what an interesting interview. I love the idea of a 'male order' MALE! :)

I love seeing what ideas other futuristic writers have of the future, and your book sounds like something I'd love to read!

I know - mail order males! Seems like a perfect answer to a big problem. LOL, but I love my hubby so guess I don't need to worry about it.