Little Sunday something to get your body going: 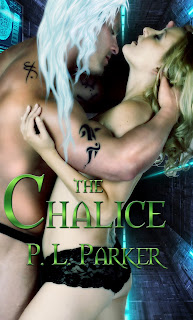 The Chalice - winner of the CTRR Award:


Goth Girl screeched and fell back, landing with a dull thump on the floor.  A sizzling hole the size of a grapefruit vented her lower torso.  She gasped, convulsed and then went limp, sightless eyes stared at the ceiling.
“Oh my God!”
Dread jerked back just in time to avoid a direct hit.  The black locks sheared from the side of her head leaving tiny tendrils of smoke spiraling up.
“You sonofabitch!” she screamed, starting out the door.  “I’ll kill you!”
Shagal crashed through, barreling into Dread as they dropped in a writhing heap of arms and legs.
Nose to nose, he snarled, “Are you crazy female?”
“He shot my hair,” she screeched, eyes flaring.  “I’m gonna kill ‘im.”
Kara rushed to the doorway and took up Dread’s position, firing a haphazard spread of glowing bursts.  Her peripheral vision caught sight of Mordaq’s silvery white braids flying out as he spun, plowing through the line of Deg’Nara.  He tossed the plasma gun aside, whipping out the formidable Tar.  The weapon slashed and diced.  Alien soldiers crumpled.  The huge Warrior was holding his own—and then some!
Shagal scrambled up, grabbed Goth Girl’s weapon and leapt out the door, both hands firing as he charged into the chaos.  Biker Chick glanced their way, shrugged in resigned acceptance, and then jumped, following him into the fracas.
“You dumbasses!” Dread screamed an anguished wail of unrestrained terror.  “You’re gonna get killed out there!”
“We’re going to get killed in here,” Anne snuffled against her sleeve.  She reached over and gently slipped the dead girl’s eyelids down.  “We don’t have a snowball’s chance in hell of surviving this.”
“Says you,” Kara muttered, snapping off another round.  “I plan on getting naked with Tegan and doing the nasty again.”
Dread’s head whipped, her mouth dropped open, dark eyes rounding.  “You screwed Lord Tegan?”
Another burst of pulsing light.  “Yep and I’m gonna do it again as soon as I get a chance, so shut up and shoot the bad guys.”
“Like I said,” Anne hissed.  “We don’t have a snowball’s chance in hell.”  She pointed.  “Look over there.”
A vehicle emerged from the Deg’Nara ship.  Heavily armored, squat and ugly, its outward appearance comparable to an armored tank.  The upper portion lifted, swiveled, and then retracted, a barrel-like object coming to rest directly in line with their position.  The machine rumbled forward on clanking metallic treads.