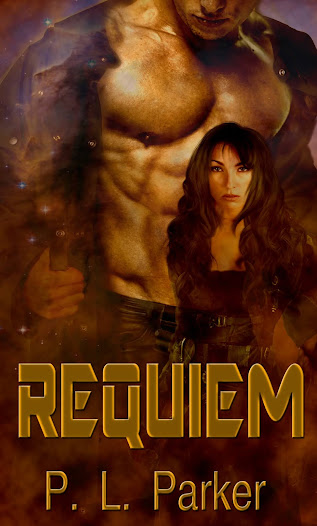 Never thought this day would get here but so close! Mark your calendars.  May 21 is the release date for REQUIEM on Amazon! Link for Kindle:

Both excited and sad, Cam stared out the viewing screen, watching and waiting for the rebel techs’ arrival. She looked forward to being back with the team but leaving Joss—and Ashyr—filled her with melancholy and deep-seated loss. Joss was her best friend and Ashyr, well, Ashyr had carved out a place in her heart. Not that he knew he had, but she knew. Just thinking about leaving and possibly never seeing him again caused her heart to ache.

Why do I care! She’d barely seen him since they arrived at the Mogishada fleet several cycles ago, mostly passing in the hall or catching brief sights of him across the way in the immense cafeteria. He was avoiding her and she couldn’t understand why.

She leaned against the viewing pane, relishing the coolness against her forehead, the action centering her and easing somewhat the dismal direction of her thoughts.

I should be ecstatic! Not down and disheartened. Being back with the rebels where she belonged was a good thing. What she wanted. She’d keep busy, involved. Work up a good sweat and go to bed, too tired to dream about what might have been. Ashyr was a pirate and he had no real affiliations other than those loose connections with others of his kind. Mooning over him wasn’t doing her a damn bit of good.

So why did it hurt so much?

“Ashyr’s looking for you.” Thrall’s husky voice startled her from her reverie.

She leaned back, fingers rubbing the faint moisture from her brow. “Why?”

He shrugged. “Didn’t say. Just said if I saw you to let you know he wanted to speak to you.”

That familiar thrill of anticipation coursed through her veins. It also irritated her that the mere mention of his name set her female parts thrumming.

“And I’m supposed to just jump when he snaps his fingers?” She spun on her heels, planning to escape.

He caught her arm before she could move away. “He wants to talk to you about something. I don’t know what but maybe it’s important.”

Important? What could be important now that the Mogishada had the kraebek? That was the only reason he was here! Against her better judgment, her innate curiosity kicked in. Didn’t hurt to at least find out what he wanted.

“It’d better be important,” she muttered. “Where do I find him?”

Thrall spoke into his wrist com. “I found her. She wants to know where you want to meet.”

Ashyr’s voice clicked on. “I’ll meet her at her quarters.”

Cam slanted a glance in Thrall’s direction. “Does he even know where my quarters are?”

Thrall’s fingers slid across the wrist com, ending the connection. His lips curved in a slight grin as he studied her stormy features. “Relax! It could be something good.”

“Meet me there in five,” she snipped, mimicking Ashyr’s voice. “Like I’m holding my breath and just waiting for him to call.”

In all actuality, she was, but no reason for him to know that. Wasn’t like she had anything better to do anyway.

Thrall waved one hand as he strode away. “Do yourself a favor and be nice.”

“I’m always nice,” she protested. “Most of the time anyway.”

She caught his derisive snort as he rounded the corner.

Jerk! She could be nice. Very nice if the situation warranted but Ashyr hadn’t been the easiest guy to get along with. 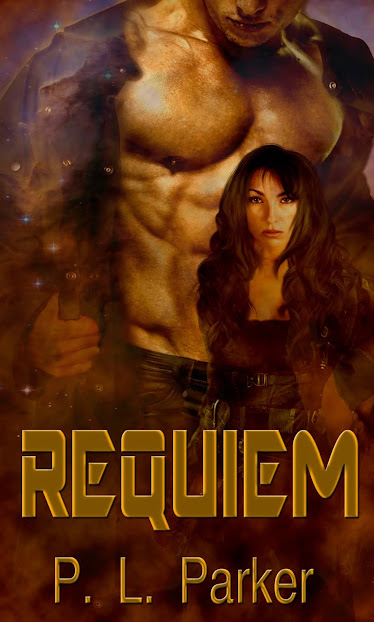 Nothing is more exciting than holding the print copies of your own book book in your hot little hands!  I've ordered mine and can't wait to get them!

By the way, I love the cover of REQUIEM, think it is my best one ever!

Want to order your print copy?  Here's the link:

E-copies of REQUIEM are available for preorder now with a release date of May 21, 2021.  Here's the preorder link:

Hope you stop by and grab your copy soon! 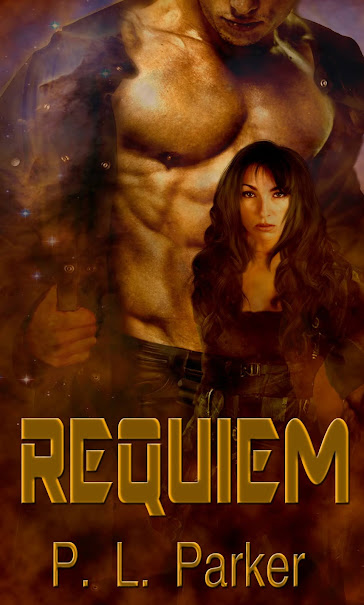 I wanted to share this quote from one of my best fans/friend as to my latest novel, REQUIEM:"Truly did enjoy Requiem!!! The only thing I was not happy with was that I finished it!! I got pulled into that story and your talent had me smelling, hearing and feeling my way." Lynne Denena.
These are the kind of comments that make me realize why I keep trying!  Thank you, Lynne, and thank you all my fans!
Patsy
Posted by P.L. Parker at 9:56 AM No comments:

Thirty-one years ago, she was sitting in a bar lending support to a friend who'd been stood up.  She wasn't looking for a mate, decided she'd be single for the rest of her life and that was okay. She was just about ready to call it an evening when a guy with sparkling dark eyes, a wide smile and dimples, leaned around a post and asked her to dance. From that moment forward, she was hooked. They had a good life together.  Soulmates, lovers, best friends, family people and the love they shared only grew over the years.  He was supportive of her, was her biggest fan, and critiqued her work but gently.

He was one of those special men who wasn't afraid to jump in and cook dinner, do the laundry, vacuum the floors, mow the lawn, whatever needed done, he did with a smile on his face.

They had a son together, which between the two of them, made five sons, the oldest nineteen years older than the youngest. 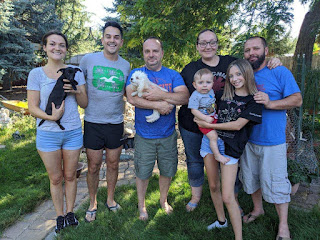 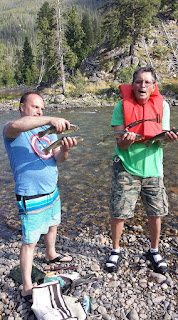 He was a good father, got better with the years and loved his children and grandchildren. 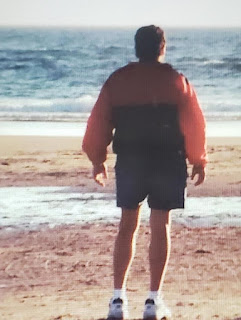 Sadly, his health deteriorated, cancer, AFib, first one stroke and then more.  She watched him slowly fade away.  On the night before he died, she was sitting with him, massaging his scalp (which he loved) and she had a vision.  She saw him sitting on a sandy beach, looking at the waves, and she thought he had a beer in his hand.  He had his usual BSU baseball cap on and as she watched, he looked over his shoulder and smiled at her.  She believed it was his way of telling her he was okay.  He died later that night and her heart went with him.

She was left with so many wonderful memories of this man.  He was funny and he could make her laugh even at the worst of times. People said they had a one-of-a-kind romance. He was a special person who made life special. 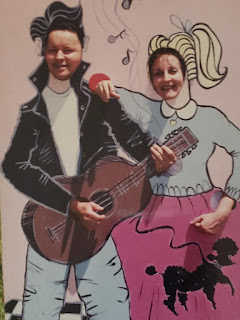 Goodbye my sweet man.  I will love you forever! 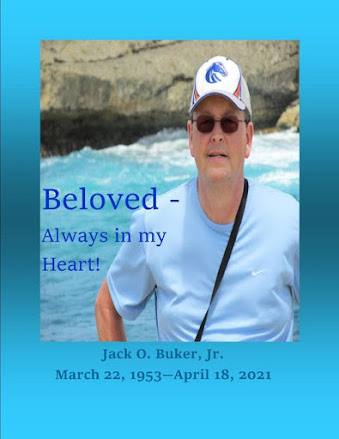 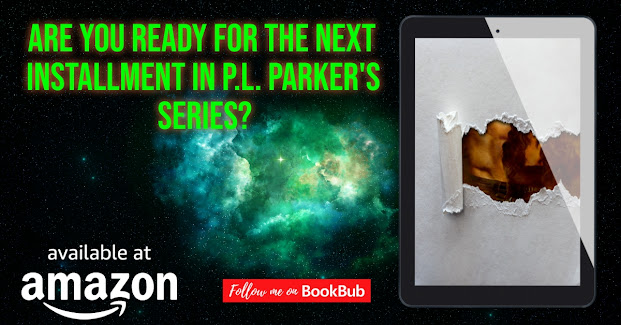 Check out the cover reveal at N.N. Light's Book Heaven for my latest scifi novel REQUIEM.  Take a little tour and see what Requiem is all about.

They need a prototype of the Deg’Nara’s latest weapon, a planet-killer, to survive. A covert operations team is tasked with finding and retrieving the weapon. Their mission is proceeding as planned but goes horribly wrong when Ashyr, a space pirate, swoops in and literally tears the weapon from the team’s hands.

REQUIEM - He had her weapon but that wasn't going to last! #scifiromance #scifi #romancebooks #spaceopera 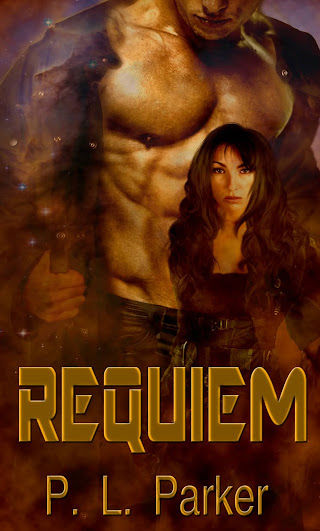 Wondering what REQUIEM is all about?  You came to the right place!

They need a prototype of the Deg’Nara’s latest weapon, a planet-killer, to survive. A covert operations team is tasked with finding and retrieving the weapon. Their mission is proceeding as planned when it goes horribly wrong.  Ashyr, a space pirate, swoops in and literally tears the weapon from the team’s hands.

Excerpt (one of my favorites):

One eye popped open. With a low groan, Cam forced the other to follow. Her head ached as though a million drums were pounding an uneven rhythm through her brain. She cringed in pain. Even her teeth hurt! She started to raise her hands and rub her forehead but then realized she was lying on her side on a lumpy cot with her hands and feet bound behind. Not much chance of escape!

Water! What she wouldn’t do for a glass of water right now. Her mouth felt like cotton and tasted like shit!

Cam’s lashes fluttered as she fought to focus. The bug-eyed, green-skinned alien of her nightmares stood before her. “Yeah, and lucky for me, the first thing I see is your butt-ugly face.”

With a growl, he fiddled with his wrist-com, releasing the shackles binding her feet and then dragged her upright. “Ashyr wants to see you. Now!”

“Sorry. No can do,” she flipped, shaking her head. “Got a bitch of a headache. Female thing you know.”

“You go,” he snarled as he shoved her through the entryway into a dimly lit corridor.

Sarcasm was always her favorite weapon when she was scared—and she was terrified right now and so stinking alone. “Help me out here! What do I call you besides creepy or ugly? Don’t get me wrong, I’m happy with either one.”

She could almost feel the steam emanating from his scaly green skin, but after a few parsecs, he grudgingly answered.

She managed a short laugh even though her heart was pounding. “Ah! Phallic? Good name. Fits.”

“Phallic! Falis! Sounds the same. Most of the males on our planet go by the name of phallic or phallus in one way or another. Doesn’t matter, but we usually shorten it to Dick!” She gave him a sneering smile. “Dick! Perfect! That’s what I’ll call you. So much more intimate.”

NOW AVAILABLE - REQUIEM - He had her weapon but that wasn't going to last! #scifi #scifiromance #plparker #romance #mustreads 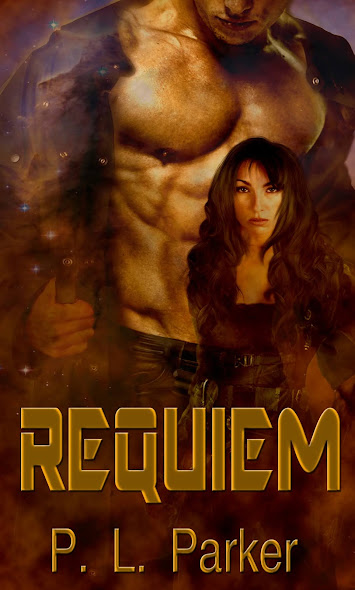 OMYGOSH!  My novel REQUIEM is now available for purchase.  Here's the link:

They need a prototype of the Deg’Nara’s latest weapon, a planet-killer, to survive. A covert operations team is tasked with finding and retrieving the weapon. Their mission is proceeding as planned when it goes horribly wrong.  Ashyr, a space pirate, swoops in and literally tears the weapon from the team’s hands.